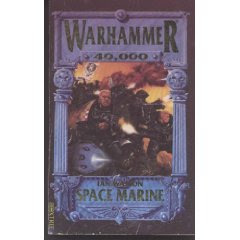 First off, I should say that I am a huge fan of the Warhammer 40k universe and enjoy collecting novels and shorts stories published by the Black Library. That being said, I have been trying to get my hands on Space Marine, by Ian Watson, for a while now. I have read reviews talking about how this is perhaps the greatest Warhammer 40k novel ever wrote and the strangest. Most dealers have this novel listed for over $100 but I was luckily able to obtain it rather cheaply (<$70). Ian Watson wrote Space Marine during the early 90’s when the background story for the Warhammer 40K universe wasn’t totally set in stone, thus most of the way he portrays the characters and the setting is quite different from what is now considered canon for Black library authors. Still it is the knowledge of this fact that causes legions of fans to seek this book out, even though most of the descriptions of the space marines and the imperium itself would be considered heretical today.

Watson’s approach to describing the future of humanity is to represent the three main roles: Lexandro, Yeremi, and Biff and existing in society somewhere between the anarchy of A Clockwork Orange and social system of Dune . The end result is a world far-removed from what we experience in our day-to-day lives. Each of the three characters comes from different social backgrounds that define them through the process of transforming from imperial civilians to trans-human space marine. For this, I must say that Watson has done a great job of creating a world you can believe exist somewhere in the unpredictable far future. This is a SF novel, yet the futuristic technology of the year 40,000 is not emphasized to a point of being a reverse-engineering textbook. In fact, most of the prominence is placed on telling the story of how each of the three main characters deal with being genetically and surgically enhanced into giant space warriors. The space marines themselves are far removed both physically and psychologically from the rest of humanity, and Watson does a great job of describing how alien space marines really are. The fortress monastery of the marines can best be compared to a university where initiates are housed, trained, and genetically altered into battle brothers. What makes the space marines so strange are the brother/lover/parental relationships they share with each other and their Deities. If you asked 1,000 adolescent males to create a warrior society in the absence of family and gave such a society 10,000 years to evolve into a religiously fanatical order of knights with nonsexual individuals displaying aspects of a homosexual social construct, you would have some idea of what space marine life is like. Once you get past the oddities of the story, one finds a quite entertaining SF novel. The descriptions of the enemies of mankind, especially the demons of chaos were both horrifying and compelling. Black Library fans will be familiar with corrupting characteristics portrayed by the Tzeentch demons.

This novel should be read by those with a solid grounding in the ‘canon’ background story of the Warhammer 40k, otherwise you may get lost really quick. That said, if you're new to Imperium of Man, be sure you read some other book first, then once you have your feet wet, read Space Marine. It will be a blast! Tweet
Posted by oshie at 1/24/2010 08:37:00 PM 0 comments

Hello there and welcome to Vonze's Reader Blog!

The purpose of this blog is to inform you of interesting books you might not have heard of, help you avoid crummy ones, serve as book review site, maybe entertain you, and help Vonze not forget all the books she read when she gets old (maybe teach the great-grandkids a thing or two, cause we're all about being hip with generations not even born yet).

The Book Reviewers for this blog include:

(As mentioned in the blog description) Vonze (pronounced Vaughn Zee) is a pseudonym for a young woman who thought she disliked reading, until that is, she graduated high school and saw that from that point she had time to read whatever she wanted. Thus to her friends and family's dismay, she started collecting 100s of books from library sales, paperbackswap.com, swaptree.com, and bookmooch.com.

This is her journey to read all these books and review what she thinks of them.

Oshie (no, not a Japanese craft) is a young man who will soon have a license to scramble your brains. But in the meantime, he's just your average heterochromian mastermind. Bookwise, he has much the same problem as Vonze does, so he'll be helping out around here.

Together, this fine young couple will be making a dent in the books on their bookshelves one review at a time. Tweet
Posted by vonze at 1/20/2010 10:47:00 PM 0 comments