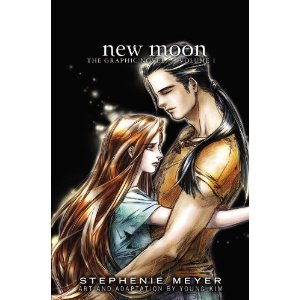 For this Waiting on Wednesday, I picked New Moon: The Graphic Novel, Volume 1 by Stephenie Meyer and Young Kim.

Book Summary: (From Amazon) "In the first installment of New Moon, Bella and Edward find themselves facing new obstacles, including a devastating separation, the mysterious appearance of dangerous wolves roaming the forest in Forks, a terrifying threat of revenge from a female vampire and a deliciously sinister encounter with Italy's reigning royal family of vampires: the Volturi."

My Thoughts: I'm loving this book to graphic novel/manga trend. I'll admit that some books don't transition to graphic novels very well. However, I feel that the Twilight Saga has, so far, transitioned well under the guidance of Young Kim's illustrations. Personally, I like Young Kim's interpretation of the characters better than the movies (*hides as Pattinson fangirls attack*). I'm glad it appears each Twilight novel will get the Young Kim graphic novel treatment. I'm looking forward to collecting each one, hopefully without the mysterious delays this one had!
Tweet
Posted by vonze at 1/23/2013 07:33:00 PM 0 comments 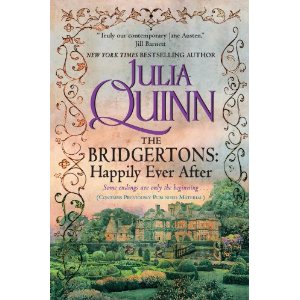 For this Waiting on Wednesday, I picked The Bridgertons: Happily Ever After by Julia Quinn.

Book Summary: (From Goodreads) "For the first time in print, New York Times bestselling author Julia Quinn presents a collection of "second epilogues" to her Bridgerton series, previously published as e-originals, plus a new bonus Bridgerton novella: Violet in Bloom," a short story in which we finally meet Edmund Bridgerton."

My Thoughts: After merrily reading my way through the Bridgerton romance series (and all of Julia Quinn's awesome romances in general) I am so happy that her "second epilogues", or short stories about each couple, will be available in one convenient collection. Since beginning the series I've wanted a prequel about the family matriarch, Violet, and her late husband. Looks like my wish may have come true!
Tweet
Posted by vonze at 1/16/2013 09:00:00 AM 0 comments

1. Daddy Long-Legs by Jean Webster was my favorite read and best discovery of 2012. How had I never read this before? How was I not familiar with this as ALL?? For me it was one of those literary treasures hidden in plain view. In quick summary, an orphan girl exchanges letters with her rich, secret benefactor who has helped her into college. I guess it could be best described as old fashioned, witty, chick-lit, comparable to a YA "You've Got Mail".

2. Anne of Green Gables by L. M. Montgomery was a very close runner-up for first place. Witty, delightful, enduring, at times drop-down-hilarious, I can't say enough good things about it. In a nutshell, it's the perfect novel for little girls or for us older ladies to vicariously re-live our own childhood.

3. Home Front by Kristin Hannah was a surprisingly good read for me. I don't read a lot of contemporaries, especially those without a major romance element in the plot. So at first I wasn't certain how I'd like this novel. However, it turned out to be a beautiful novel of both struggle and strength, of love lost and re-found.

4. A Wizard of Earthsea by Ursula K. Le Guin After watching the anime (that sometimes gets a bad rap) my interest was piqued. When reading the novel what I found was an enchanting fantasy that truly captivated me. I plan to read more of this series asap! One of the best fantasy novels I've ever read.

5. Winter's Bone by Daniel Woodrell This was another saw-the-movie-wanted-to-read-the-book deal for me. I might be a little biased because I used to know people in a similar, dysfunctional family situation like the main character Ree. While not an easy-read, nor a cheerful one, I found the majority of Ree's struggles to be realistic. So much so, I don't doubt that some of it is auto-biographical on Woodrell's part. Recommended for mature readers.

6. Into the Wild by Jon Krakauer was another surprisingly good read for me. I started it, honestly, out of the hope to donate it to Goodwill afterwards and clear out some of my shelf space. But I ended up keeping it. I'm not much for mysteries, but I became caught up in the strangeness of Christopher McCandless' death. By the end of the book, believe it or not, I felt like I knew him, and had a new appreciation for nature through his point of view.

7. Dead Until Dark by Charlaine Harris was the best vampire novel I've read in a long time. In truth, I lost a lot of the awe for the Twilight series after reading this. Not saying that Twilight ripped it off, but I feel that an editor or someone else in the editing process should have noticed a lot of the likenesses and changed Twilight up a bit. But I digress, Dead Until Dark is a great vampire romance for mature readers.

8. Songs for a Teenage Nomad by Kim Culbertson is a very underrated YA! I'm surprised that it doesn't have more/better reviews. It's now one of my favorite contemporary YA's, a great twist on the wise-beyond-her-years girl who's new in town.

9. Wishful Drinking by Carrie Fisher Again, I'm probably a little biased here, because I'm a former huge Star Wars nerdette AND I got see Carrie talk about this book in person at Atlanta's Dragon*Con. For fans, it's interesting to learn about her life, opinions, and little facts about the movie.

10. On The Way To The Wedding by Julia Quinn was an awesome way to end the Bridgerton series. For a romance, it had an action packed ending that kept me guessing until the final chapter. 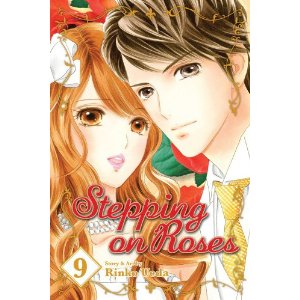 For this Waiting on Wednesday, I picked Stepping on Roses, Vol. 9 by Rinko Ueda.

Book Summary: (From Amazon) "Poor Sumi Kitamura… Her irresponsible older brother Eisuke keeps bringing home orphans for her to take care of even though they can barely afford their own basic needs! Just when Sumi's financial problems become dire, wealthy Soichiro Ashida enters her life with a bizarre proposition: he'll provide her with the money she so desperately needs if she agrees to marry him. But can Sumi fool high society into thinking she's a proper lady? Moreover, is it worth giving up everything for this sham of a marriage?

Sumi tries to get Soichiro’s company back for him, but she doesn’t realize that he’s about to embark on a life-changing opportunity. Meanwhile, Nozomu is hellbent on marrying Sumi regardless of any consequences. Can anything stop Nozomu at this point? Or will Sumi and Soichiro find a way to be together?"

My Thoughts: Will the suspense ever end? Will I ever know who Sumi ends up with (please, say it's Soichiro!)?!....I know this is melodrama, but I am completely wrapped up in it. It's like my manga equivalent of a soap opera. This series and Downton Abbey drive me nuts (in a good way). I honestly thought the last volume was the final volume, however, the drama continues in Volume 9.
Tweet
Posted by vonze at 1/09/2013 09:00:00 AM 0 comments

Happy Belated New Year to my wonderful readers and followers!

I am proud to write that I completed my challenge to read 215 books in 2012! I was cutting it close, but I got it finished before December was over. I think this challenge proves that you really can do anything you set your mind to...I never imaged I'd read that many books in my lifetime prior to finding the Goodreads reading community. So, thank you Goodreads for inspiring me, introducing me to so many cool blogs, and great books!

With that said, it's time to think of my new challenges for 2013. This year is going to be a busy one for my med student husband and I, so, unfortunately I won't be able to top my reading record. However, I have signed up to read 48 romance novels for the Reading Romances Challenge and 26 YA novels for the A-Z Challenge. I suck at math, but I believe that's a grand total of 74 books this year...which may end up being a few more if I include books read for class and my other interests/hobbies.