Review: The Nonesuch by Georgette Heyer 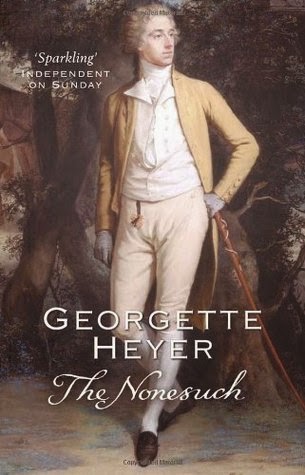 When they learned that Sir Waldo Hawkridge was coming, the village gentry were thrown into a flurry. The famed sportsman himself! Heir to an uncounted fortune, and a leader of London society! The local youths idolized "the Nonesuch"; the fathers disapproved; and the mothers and daughters saw him as the most eligible--and elusive--man in the kingdom.

But one person remained calm. When she became a governess, Ancilla Trent had put away romance, and at first she could only be amused at the fuss over Sir Waldo. But when he ignored the well-born beauties of the district, a shocking question began to form: could the celebrated gentleman be courting her?"

My Thoughts: For years, I repeatedly read that Georgette Heyer is a good author to check out after Jane Austen. Heyer sat on my to-read list, unread, until this year.

The Nonesuch started a little slow and I felt bombarded with characters. However, once the plot thickened, I really enjoyed Heyer’s wit. The author’s ability to create an immersive community and sense of humor did remind me of Jane Austen. Overall, it’s a sweet read for Regency fans. I wasn’t crazy about the name Waldo. I kept picturing “Where’s Waldo” in my mind, placing the hero in a red, striped shirt.
Tweet
Posted by vonze at 11/15/2014 06:46:00 PM