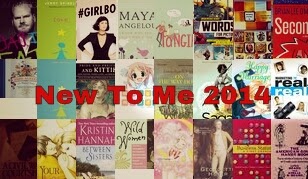 2.) Allie Brosh via Hyperbole And A Half - I honestly can't put into words how encouraging this was to me.

3.) Jerry Spinelli via Stargirl - Jerry has such an easy-going and comforting writing style. Stargirl now has a place on my favorite list.

4.) Rainbow Rowell via Fangirl - As I've mentioned before, Rainbow Rowell is very refreshing because she's up-to-date with geek culture that's still on the outskirts of mainstream.

5.) Georgette Heyer via The Nonesuch - Over and over again I've seen Georgette Heyer compared to Jane Austen. I finally discovered that much like Austen, Heyer is very witty and good at creating interesting social scenes.

6.) Jenny Lawson via Let's Pretend This Never Happened - I started the year off right with Jenny Lawson's hilarious but shocking memoir. I wasn't previously familiar with her blog, but now I'm a fan.

7.) Jim Gaffigan via Dad Is Fat - I knew Jim from his stand-up and Pale Force, but not the land of humor writing. He's funny in all forms.

9.) Lucy Knisley via Displacement - Another author that I knew of, but hadn't read. I was a fan of her comic online. With Displacement, I was very impressed by her honest and sensitive exploration of aging and a person's relationship to their grandparents.

10.) Hunter Davies via The Beatles Lyrics - Kudos to Davies for putting together a fun reference of the stories behind the Beatles lyrics. I learned awesome tidbits about some of my favorite songs.
Tweet
Posted by vonze at 12/09/2014 08:00:00 AM