Classics Corner: A Princess of Mars by Edgar Rice Burroughs 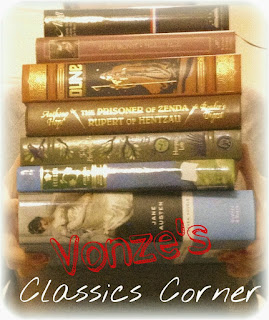 A Princess of Mars by Edgar Rice Burroughs
My rating: 3 of 5 stars

For years I intended to read this novel. I heard over and over again how it's classic scifi, influencer of many books, movies, tv shows we love today. Published in 1917, it's the great-granddaddy of them all.

Then Disney happened. 'John Carter of Mars' is Disney's film version of 'A Princess of Mars'. Dunno why they didn't call the movie by the book's title, unless it goes along with the company trying to get away from anything 'Princess' (thus titles like 'Tangled,' 'Brave,' and 'Frozen'). At first, I was happy a movie was being made of the book. I thought, maybe, it'd give me a taste of the novel, so I'd know what to expect. But then, I'll be honest, I didn't go see the movie because the reviews were so bad. Everyone seemed to be so mad at Disney for created something so stupid. I kept wondering if Disney didn't do the book justice or the reviewers hated the book, too. No one ever said. No one mentioned that it was classic scifi novel in the public domain...and although Disney lost money, it wasn't like it was an original Disney work they poured their hearts out over.

Curious how bad the movie could be, the husband and I watched it. It's NOT that bad. I've endured much worse blockbusters. The pacing in the beginning is slow, but ultimately the film improves later on. Dunno if the pacing/bad editing in the beginning turned people away, or if they didn't like the mix of scifi and fantasy. In today's world, scifi can be very scientific. If the theories in the story aren't kinda maybe possible, people will pick them apart (Scientists on NPR covering Jurassic World for example). We want our scifi to be almost real.

John Carter is a Civil War veteran who finds a cave that takes him to Mars. It's not extremely scientific, it's more magical. He suddenly finds that he also has super human powers on Mars. He befriends a local tribe of green people, gets caught up in politics (that are about as interesting as the Star Wars prequels), and falls in love with a captive humanoid princess. Like any super hero, he saves the day and gets the girl. The book ends on a sad note, but sets the story up for its many sequels.

The story is told by John Carter and really shows its age. Indians are out to get you old-West-style. John Carter is a Confederate gentleman who never forgets his genteel manners no matter what's happening to him. Everyone is either super good or bad. The princess is objectified and needs saving. John Carter suddenly notices that she's humanoid and is instantly in love with her. He turns kinda "Me Tarzan, You Jane" on her. So, it doesn't stand the test of time. When reading (or watching the movie) you've really got to consider the time frame it was published. It's very imaginative for its time. The book rightly belongs on the shelf with other old timers like Tarzan (also by Burroughs) and The Prisoner of Zenda. Still not a bad read if you're a scifi nerd, into classics, or both.

In My Mailbox: June/beginning of July 2015 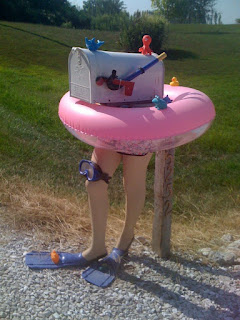 In My Mailbox: June/beginning of July 2015

It's been a good summer so far with a mix of hot and tolerable weather. Yeah, I wish my real mailbox was that cool! 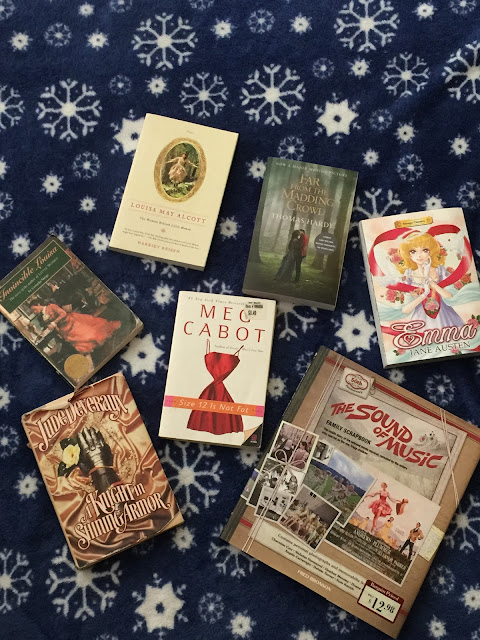 Here's a picture of my latest incomings, a mix of bookstore, borrowing, swapping, and used finds. As I mentioned before, Emma was great. Far From the Madding Crowd is high on my to-read list. A Knight in Shining Armor was a lucky find; I challenged myself to read 'x' amount of medieval romance this year and so far I haven't finished any. Recently, I found two Louisa May Alcott bios. You can't go wrong with Meg Cabot and anything surrounding The Sound of Music. 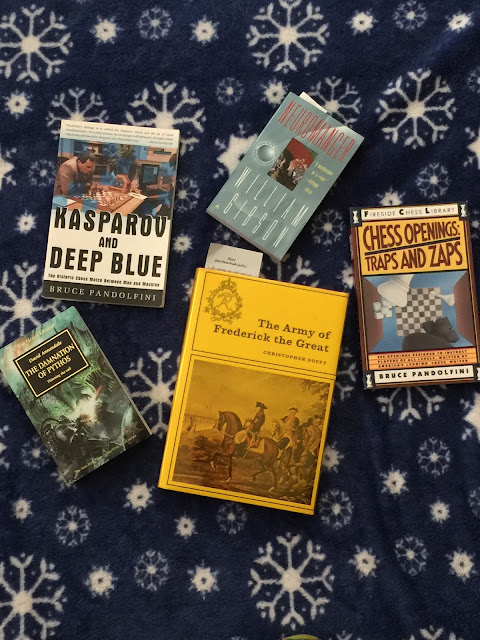 A shot of Oshie's recent finds. As always, Warhammer, chess, and scifi :) (I know you like our snowflake pattern in July!) 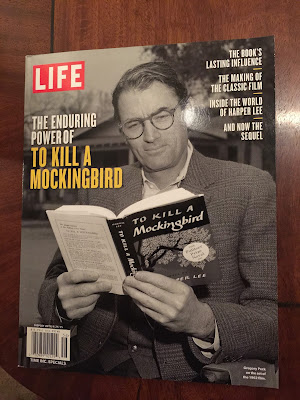 And sweet Oshie surprised me with this Life magazine covering 'To Kill A Mockingbird,' which I just visited re-read a few days ago. I'm super hyped and curious about 'Go Set A Watchman.' Love the cover! Gregory Peck is perfect as Atticus. When I read the book I always imagine him playing out the chapters. 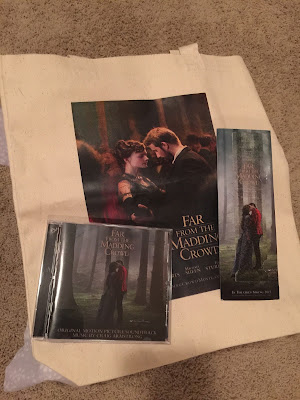 I was so lucky and happy to win a Far From the Madding Crowd prize pack from @Marcus_Theatres via Twitter!  Oshie and I really wanted to buy the score and I had eyeballed several tote bags on Ebay. But, I was putting it off to save money for other things. I couldn't believe I'd won! Now I can show the book and movie off to everyone in style! 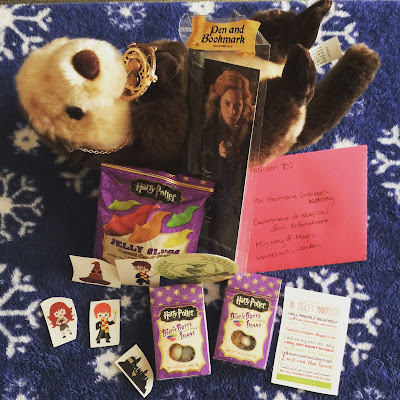 A few weeks ago, I reviewed The Fangirl's Guide to the Galaxy by Sam Maggs. In the Resources section, I found a great link to the International Geek Girl Pen Pals. And from there, I learned about a Fictional Lost Post Swap on the forum. It sounded fun and a good fit for book blogging and creative writing. The other day I was so excited to see a note addressed to "Ms. Hermione Granger-Weasley" :D @amavongeek created the perfect swap for me! She wrote to Hermione as Rita Skeeter and completely cracked us up! I have always wanted a time-turner and Oshie is totally going take the otter away (he really likes otters!) Really want to re-watch all the movies now.

Well, the Lit nerd event of the summer is upon us! Described as the literary event of a lifetime, because no one predicted that more of reclusive Harper Lee's work would be released...ever, I have eagerly awaited my copy. 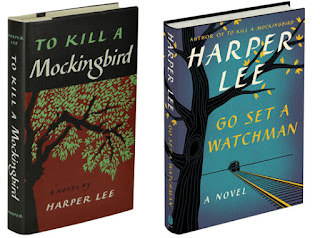 I have heard that it's HarperCollins' largest pre-order ever. Some have compared it to the release of the last Harry Potter novel. People are flocking to Harper Lee's hometown of Monroeville, AL to buy the book. Booksamillion and Barnes & Noble are also planning release events today and tomorrow. 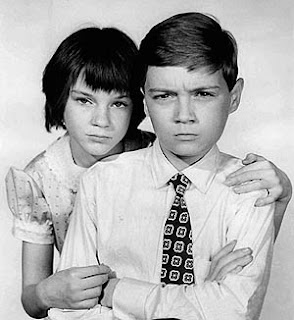 Personally, I go way back with the film version of "To Kill A Mockingbird." I might have been three or four the first time I watched it. At that time, I only recall being interested in Jim, Scout, and Dill running around the town and playing in tires. To me, they were those bad kids I watched on tv. I was also very concerned that they were filmed in black & while instead of color (little did I know that the kids were actually adults in the 80s). I'm from a family of teachers, so they introduced me to movie versions of great Lit works very young. I also have fond but confused memories of "Watership Down" and "Mrs. Frisby and the Rats of NIMH." Anyways, to this day, I've probably seen "To Kill A Mockingbird" over a hundred times.

A few weeks ago, I listened to the audiobook in preparation of "Go Set A Watchman." Mostly to save time, I have read the book three times before, but it was foggy in my memory. And once again, I was in awe of Lee's work. She weaves a small town into life while writing from an innocent child's point-of-view AND makes it seem effortless. The book is not only a snapshot of the struggles against racism, but also addiction, poverty, mental illness, (possible) neurodevelopment disorders (Autism), education, sexism, and child abuse. It is a mixing pot social commentary, the likes of which have never been so uniquely explored again. 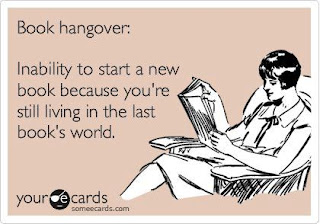 Revisiting the novel, I found myself so attached to the characters. People joke on social media about book hangovers, but I literally had one! I was so sad that it ended. I wanted to be there with Atticus when Jem woke up. I want to go to school Scout and see Dill's face during the summer when he hears that Scout finally met Boo. I want to go to church with Cal and laugh with Uncle Jack during the holidays. 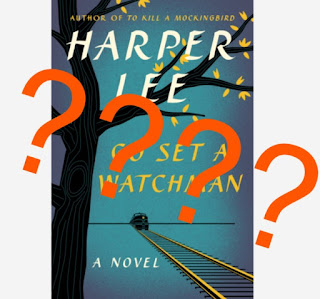 With that, I have so many questions about the new book. I am aware, as I hope you are too, that it is not truly a sequel or a prequel to "To Kill A Mockingbird." It is the publication of her original draft of the book. In a sense, an alternative universe for the characters. So potentially:


Therefore, I realize that I could really, really hate this book. Drafts are drafts for a reason. Unfortunately, I've already heard some spoilers. Now I'm wondering if the reputation of certain characters can withstand their alternate forms.

My further musings include:
Only time will tell if any of those questions are answered in "Go Set A Watchman." If you can't wait, you can go ahead and read the first chapter at: http://www.theguardian.com/books/ng-interactive/2015/jul/10/go-set-a-watchman-read-the-first-chapter
Tweet
Posted by vonze at 7/13/2015 12:00:00 PM 0 comments 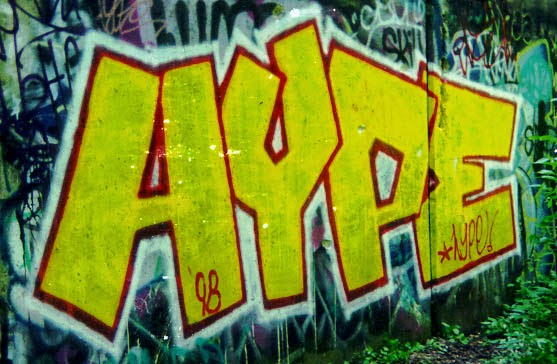 1.) The Lightning Thief/Percy Jackson series - I've never been a fan of mythology. I can't really say if it was the way it was taught in school or if the number of gods and goddesses just overwhelm me.

2.) The Fault in Our Stars - John Green is a good writer, but his novels seem to be sad slices of life. "A Walk to Remember" was my generation's version of this.

3.) The Kite Runner - I've heard nothing but good things about Khaled Hosseini's work. Just haven't got around to reading it.

4.) 1984 - It ranks in every "books everyone should read" list I've seen on and off Goodreads. I know it's inspired several of my favorite books and movies. I should really move it higher on my to-read list.

5.) The Time Traveler's Wife - Many people recommended it to me when it was first released, but I ended up watching the movie instead. I liked the movie and I'm sure the book is much better.

6.) The Chronicles of Narnia - I wanted to read this series in middle school, but prior to the Internet, I had no way of knowing which was the first book. Again, watched the movies instead...

7.) The Girl With The Dragon Tattoo - I'm not much for thriller, mystery novels. Watching the international version of the movie, and fast forwarding through several parts, was enough for me.

9.) Life of Pi - I'm starting to see that when movies of books are released, it kinda kills my eagerness to read them.