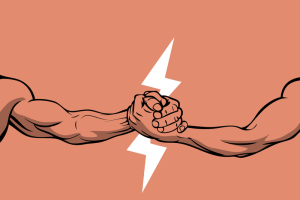 Felicia Day and Rainbow Rowell - Fangirls unite! Both authors capture the ups and downs of being a geeky girl so well that they should really team up.

Meg Cabot and Tina Fey - Both of these ladies crack me up and I could really see their styles working together for a hilarious duo.

J.K. Rowling and Suzanne Collins - It'll probably never happen, but could you imagine the interesting world, characters, and themes these two ladies could create together??

Brian K. Vaughn + Fiona Staples and George R. R. Martin - Brian K. Vaughn and Fiona Staples are the duo behind the graphic novel epic "Saga". George R.R. Martin, of course, is the author behind the wildly popular "Game of Thrones". Although I'm personally a prude towards a lot of the adult content in both, each individual has created a universe and characters who are very refreshing to me. As a team, they would create an epic scifi fantasy graphic novel.

Nicholas Sparks and Kristin Hannah - This team could write an epic contemporary romance. Both authors are good at breaking your heart, but at the same time, making you love the character's journey.

Julianne Donaldson and Rachel Hauck - Hands down, these ladies are my favorite clean romance authors! Their characters are charming and relatable, while the plots are fun and uplifting. They should hang out!

V.E. Schwab and Juliet Marillier - Brining these two together, could possibly create the most uniquely beautiful fantasy story ever.

Gail Carson Levine and Robin McKinley - Who else would love these classic, old school YA fantasy authors pairing up for an awesome adventure? It would be magical.

Stacy King and The Bronte Sisters - Although the Brontes are no longer with us, as a classic lit AND manga nerd, I've really enjoyed Stacy King's Manga Classics series thus far. Fingers crossed she'll be *working with* the Brontes sooner than later!
Tweet
Posted by vonze at 10/13/2015 07:30:00 AM