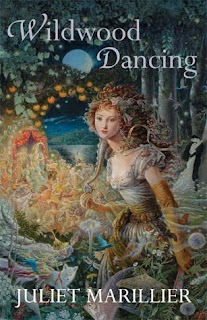 Book Description: "High in the Transylvanian woods, at the castle Piscul Draculi, live five daughters and their doting father. It's an idyllic life for Jena, the second eldest, who spends her time exploring the mysterious forest with her constant companion, a most unusual frog. But best by far is the castle's hidden portal, known only to the sisters. Every Full Moon, they alone can pass through it into the enchanted world of the Other Kingdom. There they dance through the night with the fey creatures of this magical realm.

But their peace is shattered when Father falls ill and must go to the southern parts to recover, for that is when cousin Cezar arrives. Though he's there to help the girls survive the brutal winter, Jena suspects he has darker motives in store. Meanwhile, Jena's sister has fallen in love with a dangerous creature of the Other Kingdom--an impossible union it's up to Jena to stop.

When Cezar's grip of power begins to tighten, at stake is everything Jena loves: her home, her family, and the Other Kingdom she has come to cherish. To save her world, Jena will be tested in ways she can't imagine--tests of trust, strength, and true love."


I loved this book, completely enjoyed it. Wildwood Dancing was on my super long to-read list for longer than I'd like to admit. I'm so glad I took time to pick it up a few weeks ago.

My first impression of this book, of course, was the beautiful cover. There's a lot to take in, but the scene has an elegant and romantic feel. I'm happy to write that the storyline is just as wonderful as the cover. The plot took about two chapters to really get started, but once it did, it was a page-turner for me. Jena is a strong, smart female main character who doesn't back down. Her cousin, Cezar, was a real worm, but I enjoyed the scenes that Jena backsassed him. I also loved many of the minor characters, especially Jena's older sister Tatiana, whose side-plot romance with one of the Night People could have been been a book in itself.

If you enjoy fairytales and folklore, this is the book for you. Wildwood Dancing left me wishing there was a sequel! Tweet
Posted by vonze at 8/17/2010 09:56:00 PM 0 comments

Hey guys, I just wanted to let you know about a cool giveaway going on at PageTurnersBlog.

They're giving away an ARC of Beautiful Darkness and Low Red Moon to one lucky winner! The contest ends Aug 24th at 11:59 CST, so be sure to enter soon.

Suzanne Collins, author of The Hunger Games series, is going on tour!

Here's a link to the list of cities: Tour Cities

TELL ME A SECRET by Holly Cupala

Check this book trailer out, it's one of the best that I've ever seen! The plot sounds really haunting and suspenseful.