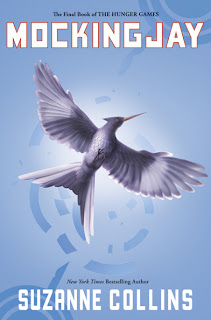 So, wow, I don't know when I had ever anticipated a book more than this. A lot of my friends love Harry Potter and the Twilight Saga, but to me the first two books of the Hunger Games were better hands down. I love books with strong female main characters. Katniss quickly became my new hero.

Thus, I eagerly counted down the days until this book's release and got up super early to drive 20 miles to my nearest Target to buy it. Then I started reading.

And it started very slowly...I'm not sure what I expected to happen. At the end of the last book there was lots of action. Mockingjay doesn't pick-up at the same point Catching Fire left off. It felt like Katniss' character was a caged animal, wanting to see some action. Only the action doesn't happen until three quarters of the book is over with. It became the kind of book you have to hang in with, because it does get better. The waiting to get to the end drove me crazy, because I wanted to know who Katniss would end up with (if she ended up with anyone) and if President Snow dies.

However, in my opinion, the ending to this series was nearly perfect. I was in tears, lol. I would have liked a little more information about what happened to some secondary characters, but that's just mainly me being a fan-girl.

I stolen this book meme from The Hiding Spot....and I think she stolen it from somewhere else, lol.

5 Books I’m Planning to Read (in the near future)
1. Sand Chronicles Vol. 9
2. Breaking Dawn
3. Clockwork Angel
4. A Most Improper Magick
5. What Would Emma Do?

5 of My Favorite Books
1. The Hunger Games Series
2. Pride and Prejudice
3. Little Women
4. Watership Down
5. The Neverending Story

5 of My Least Favorite Books
1. Moby Dick
2. The Gunslinger (tried to read this three times, could not get into it)
3. The Odyssey
4. The Hobbit (good, but I hated the cop-out ending)
5. I Capture the Castle (loved the beginning, hated the end)

Review: Pride and Prejudice and Zombies: Dawn of the Dreadfuls

Pride and Prejudice and Zombies: Dawn of the Dreadfuls by Steve Hockensmith


I won a copy of this book from First Reads here on Goodreads!

Okay, first off, I am not a zombie, horror genre person. However, I love Pride and Prejudice and I also enjoy spoofs in general. So, when I started to read Pride and Prejudice and Zombies: Dawn of the Dreadfuls, I kept an open mind. And I was happy to find that I really enjoyed the story. I fought this spoof to be tastefully done, there wasn't guts hanging out of people in every paragraph. And I also found myself rooting for Lizzie and others to do well in their zombie training. I feel that the author got the well known personalities of Lizzie, Mr. and Mrs. Bennet, Jane, Mary, Kitty and Lydia from the original novel right.

With that said, I hope to pick up a copy of the first Pride and Prejudice and Zombies soon and see what happens next!

Something New: Wedding Etiquette for Rule Breakers, Traditionalists, and Everyone in Between by Elise Mac Adam


Useful book for brides-to-be. This book covers a lot of issues dealing with family members, bridal party, who to invite, what to wear, who pays, etc. Basically lets a bride and groom know which wedding rules guests don't care if you break and which wedding rules people get upset about and why and what to do about it. I found this book helpful, considering I am little bit of a rule breaker.

Hey everybody! Head over to The Undercover Book Lover and checkout the great prize packs you can win in the Hunger for HarperTeen Contest.