Twenty Boy Summer is a well-written, and very moving, coming-of-age YA about love, grief and how life goes on. If you can't get to the beach this summer, this book will take you there mentally.

I don't normally read YA contemporaries (unless they're romantic comedies), but prior to buying Twenty Boy Summer I read great reviews for it, and decided to see if it lived up to the fuss for myself. I wasn't disappointed in the least. I loved how mature and realistic this book was.

As the book summary hints at, Anna always had a crush on her best friend's brother, and he returned her feelings just weeks before he died. He made her promise to keep their romance a secret because he wanted to tell his sister himself, in time, to make sure she approved and wasn't shocked. When he passes away, Anna decides to keep their secret forever. She's unsure how his family would react if she told them, unsure if she was just a fling to him or something more. However, a year later, when his family invites her on vacation and her best friend wants to hunt for boys on the beach, Anna is forced to deal with emotions she's locked up inside, and learn that you can move on without forgetting. 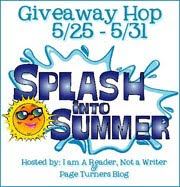 The weather is getting hotter where me and Oshie live! There's nothing better than chilling out with a good book that you've been waiting to read, ah, so relaxing. So, for the Splash Into Summer giveaway, we've got a $10 giftcard in book money from either amazon.com or bookdepository.co.uk (your choice) up for grabs.

Our contest is international and runs May 25th to May 31st. The winner will be announced June 1st.

Just fill out the form below and please spread the word about Vonze's Reader Blog to your friends. Be sure to check out all the great Splash Into Summer giveaways below! 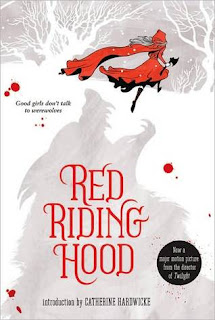 Book description: "Valerie's sister was beautiful, kind, and sweet. Now she is dead. Henry, the handsome son of the blacksmith, tries to console Valerie, but her wild heart beats fast for another: the outcast woodcutter, Peter, who offers Valerie another life far from home.

After her sister's violent death, Valerie's world begins to spiral out of control. For generations, the Wolf has been kept at bay with a monthly sacrifice. But now no one is safe. When an expert Wolf hunter arrives, the villagers learn that the creature lives among them--it could be anyone in town.

It soon becomes clear that Valerie is the only one who can hear the voice of the creature. The Wolf says she must surrender herself before the blood moon wanes...or everyone she loves will die."

Well, first off, the cover is awesome. Judging by the cover, I just knew that the Red Riding Hood character in the story was fighting werewolves with that ax, being a kick-arse heroine.

However, now that I've read the story, I don't think the character ever held an ax. She turned out to be more like werewolf bait than a fighter.

But, my cover delusions aside, the story was just okay. Valerie's sister is killed by a werewolf, and then everyone in town is suspected of being the wolf. Is it Valerie's fiance? Is it her childhood sweetheart that's suddenly back in town? Is it her strange witch-like grandma? Is it one of her friends? The suspense of not knowing who the Wolf was kept me reading, but, honestly, I didn't care for Valerie as a heroine. I guess I wanted her to be apart of the action so badly, that when she was more focused on moping over her childhood sweetheart, than saving the town, I was disappointed.

I haven't seen the movie, but I guess I'm still interested enough to rent it. The previews looked nice, but much like my thoughts on the cover, I could be wrong. Tweet
Posted by vonze at 5/24/2011 07:24:00 PM 1 comments

The Host by Stephenie Meyer


I was pleasantly surprised by The Host. I really didn't know what to expect, Twilight with aliens, maybe?

I listened to the audiobook, which was well done, even though it uses only one voice actor. The first couple of chapters are very confusing and slow. I'll admit, if I had been reading the book instead of listening to it, I probably would have sat the book down and tried it again later. But it you stick with it, it gets better.

Basically, in a nutshell, alien lifeforms have invaded Earth prior to the beginning of the book. The lifeforms, or Souls, as they call themselves, live many lifetimes by using "host" bodies. Humans are their newest "host" bodies. The story follows one Soul, called Wanderer, who has a problem. Normally, when a Soul takes over a host, the host's mind fades away. The mind of Wanderer's host is not fading away. It's like she has two personalities inside her brain. The host's mind is so strong, that Wanderer actually begins caring about her host's old family and decides to go look for them among a group of rebel humans hiding in the desert.

The story does have a very strange love triangle (or more like love square? I'm not sure what to call it) between the host and her old partner, Wanderer and the host's partner and Wanderer and a rebel human that she grows to care for. But, with that said, I wouldn't categorize The Host as a romance. The story mainly focuses on Wanderer's struggle with her host and the human struggle to survive without being caught by the Souls.

Although I'm a scifi movie fan, I haven't read that much scifi, so I don't know what to compare it to. The human resistance reminds me a little of Terminator, but the Souls are nothing like killing machines.

I really enjoyed the scifi world that Stephanie Meyer created in the story. The book really doesn't need a sequel, but needless to say, I still look forward to one. 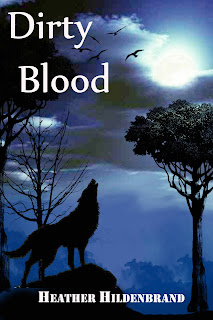 Are you the sort of person that's always dreamed of having a literary character named after you? If so, now's your chance! Check out NightlyReading's Dirty Blood giveaway, if you win the grand price, the author will name a character in the sequel after you! Tweet
Posted by vonze at 5/20/2011 01:58:00 PM 0 comments


Ok, I'll admit, I've never seen 30 Rock. However, I have been a fan of SNL since I was about eight years old. I had one of those cool moms that let me stay up every Saturday night and watch it with her (of course, if it got too raunchy or racy for a little kid she'd turn the channel and explain why certain jokes went too far). During high school, I loved Tina Fey on Weekend Update (one of the best parts of the show in my opinion), so naturally, I was interested when I learned she had a book out. I downloaded the audiobook and enjoyed it so much that I finished it in one day. I knew it was going to be funny and I wasn't disappointed at all. Listening to her memories is like sitting down with your favorite witty relative, her humor is so natural and engaging. She covers a wide range of topics from her childhood, romantic mishaps, her improv years, behind the scenes at SNL, 30 Rock, the Sarah Palin Impression, what it's like to be the boss and being a working mother. Whether you're a 30 Rock or SNL fan, curious what was going on in her mind during the Sarah Palin Impression, or just need a good laugh, Bossypants is a good read!