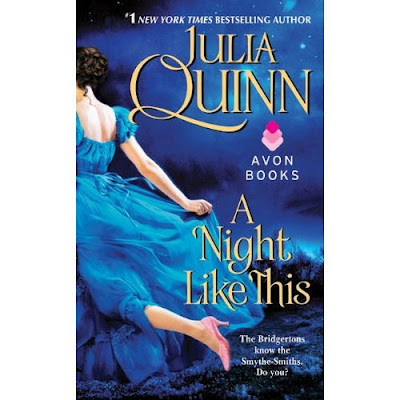 For this Waiting on Wednesday, I picked A Night Like This by Julia Quinn.

Book Summary: "Three years ago, Daniel Smythe-Smith shot a man in a duel and was forced to flee the country. He used to be a devil-may-care charmer, but after three years of being quite literally hunted, he is wary and on edge. Now he's back in London and, on the night of his arrival, attends the annual Smythe-Smith musicale, where he notices that the young woman at the piano is definitely not his cousin. Anne Shawcross made a terrible mistake at the age of sixteen. Ruined by the son of the most important family in the district, she changed her last name and left home, eventually becoming the governess to the Earl of Pleinsworth's three daughters. When Sarah Pleinsworth takes ill the night of the musicale, Anne is asked to step in. Could Sarah be the woman to save Daniel and his wounded heart? New York Times bestselling author Julia Quinn's enchanting second novel in the Smythe-Smith quartet is guaranteed to make you laugh out loud and tug at your heartstrings in equal measures."

My Thoughts: In the past year, I've come to love Julia Quinn's novels. While a lot of romance novels have a bad rep for being repetitive and trashy (some are), Julia Quinn writes what I'd like to call a smart woman's romance. Her heroines are not needy and stupid, her heroes are not enraged, dictative alpha-males. When I started the Bridgerton series, I was doubtful and expected each book to be formulamatic. Eight books in a romance series seemed like a lot. Little did I know, I was going to get caught up in the society of lovable characters Julia Quinn has created. So much so, I'm currently trying to collect every novel she's written. I can't wait to see what happens next in the Smythe-Smith family. I'm also hoping this won't be the last book of the Smythe-Smith series.
Tweet
Posted by vonze at 4/25/2012 03:10:00 PM 0 comments 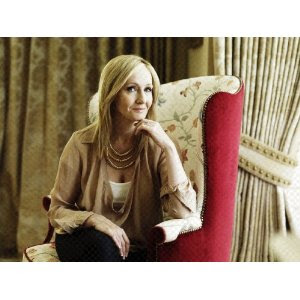 For this Waiting on Wednesday, I picked The Casual Vacancy by J.K. Rowling.

Book Summary:"When Barry Fairweather dies unexpectedly in his early forties, the little town of Pagford is left in shock. Pagford is, seemingly, an English idyll, with a cobbled market square and an ancient abbey, but what lies behind the pretty façade is a town at war. Rich at war with poor, teenagers at war with their parents, wives at war with their husbands, teachers at war with their pupils…. Pagford is not what it first seems. And the empty seat left by Barry on the town’s council soon becomes the catalyst for the biggest war the town has yet seen. Who will triumph in an election fraught with passion, duplicity and unexpected revelations? Blackly comic, thought-provoking and constantly surprising, The Casual Vacancy is J.K. Rowling’s first novel for adults."

My Thoughts: Finally! It has a title and description! How about a cover? Although that is a nice photo of J.K. Rowling, she hasn't aged much, she looks very elegant and mysterious.

The description is a little dubious to me. It makes me wonder who are the main characters of this book? Barry Fairweather is dead, so will he be a character in flashbacks? Will the book be loaded with characters from this town? Or will it focus more on the characters who are trying to replace him?

At 480 pages, this book is a little slim for Ms. Rowling. I was expecting a 900 page juggernaut.

I'm a little nervous for her as a writer. I loved her writing style in the Harry Potter books. But I'm afraid that if people don't like her as an adult writer in this book, she'll have a hard time breaking out of children's literature indefinitely. Tweet
Posted by vonze at 4/18/2012 10:00:00 AM 0 comments