Review: The DIY Bride: An Affair to Remember

The DIY Bride An Affair to Remember: 40 Fantastic Projects to Celebrate Your Unique Wedding Style by Khris Cochran
My rating: 4 of 5 stars


Here's one for all my soon-to-be married or dreaming-of-getting-married reader buddies out there!

In 2010 I planned my very, very DIY Christmas wedding. I consider myself a more-than-average crafty person and I was on a small budget what with my future-hubby in med school.

The thing I enjoyed most about this book, is the fact that it is broken down into themes. These themes include: Sun & Sand, Fairy-Tale, Exotic Destinations, Winter Wonderland, A Touch of Country, Bright Lights-Big City, Into the Garden, and New Modern.

In my opinion, every great wedding, birthday, graduation, etc. party needs a theme.

Since my theme was Christmas/Winter this book would have given me some good ideas. It was surprisingly hard to find Christmas themed wedding ideas.

Overall, I'd say the Sun & Sand theme had the crafts that I liked best/would have used if I'd been married at the beach. The seashell boutonniere and invitations were cute. To me it's the book's best and strongest theme. 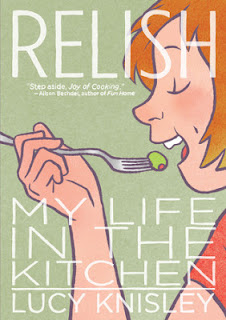 For this Waiting on Wednesday, I picked Relish: My Life in the Kitchen by Lucy Knisley.

Book Summary: (From Goodreads.com) "A vibrant, food-themed memoir from beloved indie cartoonist Lucy Knisley. Lucy Knisley loves food. The daughter of a chef and a gourmet, this talented young cartoonist comes by her obsession honestly. In her forthright, thoughtful, andfunny memoir, Lucy traces key episodes in her life thus far, framed by what she was eating at the time and lessons learned about food, cooking, and life. Each chapter is bookended with an illustrated recipe—many of them treasured family dishes, and a few of them Lucy's original inventions. A welcome read for anyone who ever felt more passion for a sandwich than is strictly speaking proper, Relish is abook for our time: it invites the reader to celebrate food as a connection to our bodies and a connection to the earth, rather than an enemy, a compulsion, or a consumer product.

My Thoughts: I love cooking. I find it to be very relaxing. So for me, because this book combines my love of cooking and my love of comics (not usually thrown together), I think it will be a good read for me. Maybe I'll learn some great new recipes in the process!

The Dark-Hunters, Vol. 1 by Sherrilyn Kenyon
My rating: 4 of 5 stars

I really enjoyed this "sort-of" vampire graphic novel. I haven't read any of Sherrilyn Kenyon's novels prior to this, so from what I gather, her vampires are actually the soul-less servants of a Greek goddess? Four stars because the explanations of the vampire creation/backstory/mechanics was a little confusing for me as a first time Dark-Hunter reader. However, it probably doesn't help that I'm not big into Greek and Roman mythology. Someone who has read or studied a lot of mythology might understand better than I did.

Otherwise, the artwork and storyline was great. I'm on board to read the other Dark-Hunter graphics novel and the actual novels in the future. This volume had a lot of humor in it and good chemistry/witty banter between the hero and heroine. Unlike many graphic novels adapted from novels out there, I think this one stands on its own very well. The dialogue and action scenes were spot on for moving the story and pace along. I feel that the author and illustrator didn't assume that I have already read all the Dark-Hunter novels before, which I appreciate. I feel that's the way adapted graphic novels should be. 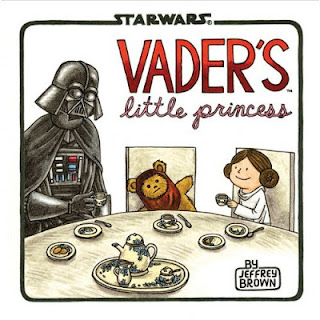 For this Waiting on Wednesday, I picked Vader's Little Princess.

Book Summary: (from Goodreads.com)"In this irresistibly funny follow-up to the breakout bestseller Darth Vader and Son, Vader—Sith Lord and leader of the Galactic Empire—now faces the trials, joys, and mood swings of raising his daughter Leia as she grows from a sweet little girl into a rebellious teenager. Smart and funny illustrations by artist Jeffrey Brown give classic Star Wars moments a twist by bringing these iconic family relations together under one roof. From tea parties to teaching Leia how to fly a TIE fighter, regulating the time she spends talking with friends via R2-D2's hologram, and making sure Leia doesn't leave the house wearing only the a skirted metal bikini, Vader's parenting skills are put hilariously to the test."

My Thoughts: As a long-time Star Wars fan, for me, the cover says it all: completely adorable. Stuffed ewok, tea and cookies, Darth Vader doing typical-good-dad-deeds...so out of character, but still adorable. While I'm not sure how I feel about the new, much talked about, Star Wars movies-to-come, this book looks awesome.
Tweet
Posted by vonze at 3/13/2013 12:13:00 PM 0 comments

Stepping on Roses, Volume 9 by Rinko Ueda
My rating: 5 of 5 stars

A fitting and beautiful ending to a historical, romantic, shojo manga that kept me on edge! Probably my favorite manga series so far.

In a nutshell, for those who haven't read the previous volumes, the main characters, Sumi (a poor girl) and Soichiro (heir to wealth), agree to marry, although they are strangers, for their mutual benefit. Through their shame marriage Sumi gains the money she needs for her family and Soichiro gains his inheritance and the respect of his grandfather.

Throughout the course of the series, it seems like Sumi and Soichiro could truly fall in love if they would just put their differences and conflicting personalities aside. Soichiro's best friend, Nozomu, also causes conflict, because to begin with Nozomu and Sumi have a mutual crush on each other. As the series progresses, Nozomu more or less becomes the villain, forcing Sumi to leave Soichiro against her will.

Nearly every chapter ends on a cliff-hanger...almost soap opera style. I ran through volumes 1-6 in a matter of days because I couldn't stand the "not-knowing" what was going to happen. I called it my manga "Downton Abbey."

I was a little surprised that Vol. 9 was the final volume, but a little glad too, because the overall conflict couldn't have realistically lasted much longer. In my opinion, the volume didn't feel rushed and all the loose ends were tied up, plus a few I hadn't really thought of.

My only, and very small, compliant, is that Sumi didn't stand up for herself in the end. She, seemingly, has the opportunity to save herself from a bad situation and doesn't take it. Soichiro rushes in to save the day, which makes for a more classic, romantic ending, but it wasn't the one I was expecting.

But with that aside, when I have more free time, I'm looking forward to re-reading this series again and again! I think it's safe to say I'm going to be a life-long Rinko Ueda fan.