I just finished Blackmoore, and now I'm having a hard time deciding which Julianne Donaldson title I like best. Adventure, a swoon-worthy hero, drama, a hugh regal house, what's not to love about both of her books? I could see both of them making an awesome miniseries. They'd be right at home on the BBC, PBS, or Hallmark Channel.

A regency family with eight siblings looking, avoiding, and accidentally falling in love: one with a duke, one with the wrong sister, one with a Cinderella girl, one with a mysterious writer, one with a penpal, with a spouse's relative, one with an unfortunate son, and one with a girl who is already engaged? Oh the drama for their poor momma. The Bridgerton series has great potential to be a interwoven family drama, with a much happier outcome than Downton Abbey. Because of its adult content, I could see it on a women's network like Lifetime or We. 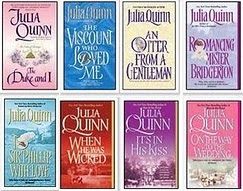 3. My Life Next Door

Such a sweet and refreshing novel. A healthy, fairly realistic teen romance, with some family drama thrown in. I could see it on the same shelf as "Ten Things I Hate About You," "Say Anything," and "Pretty In Pink." It would make a great full length film or tv movie on ABC family.

4. How Not To Be Popular

This novel was cute, funny, with a bit of retro clothing hipster thrown in. Pre-Lady Gaga, a teenage girl decides she's going to throw together strange outfits to express herself and keep others away. It would make a funny Disney movie.

5. Songs for A Teenage Nomad

A great book for music lovers, this novel really inspired me. I could see it as an MTV series because the character reminds me of the girls from "Freaks and Geeks" and "My So Called Life" with less angst and more expression.

6. Once Upon A Prince

An awesome, romantic novel for people who love modern fairy tales and enjoy watching the royal family. This would make a prefect Valentine's Day movie, either on the big screen on television.

While I've enjoyed the episodes I've watched of "Emily of New Moon" and the PBS version of Anne of Green Gables, isn't about time to re-vamp this awesome series for girls? I'm calling for a new series that follows Anne from Green Gables to Rainbow Valley. Come on PBS, Disney, etc, what do you say?

Man I love this book so much. There's not a decent "non-musical" film out there. Hey, I'd settle for a modern-day retelling.

How is this paranormal, Twilight-esque series, with hints PG-13 "50 Shades" S&M, not an anime yet? If this was a YA novel and not a manga, it would be a household name.

Labels: movie, novels, top ten, wish it was a movie