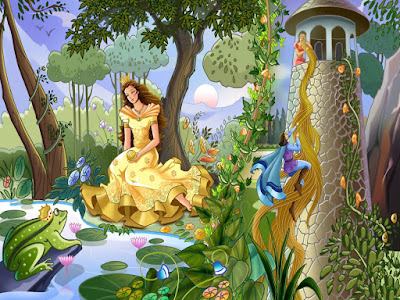 I've always been fascinated by fairy tales, so naturally I love a good retelling. This post is dedicated to my late Grandmother, who passed last month. She read me fairy tales that still inspire my reading and writing choices today. Go read to a child, they listen!

1.) Cinder by Marissa Meyer - I feel like I just added this to the most hyped books I've never read (cause I did). I've read nothing but good things and I love scifi, so it sounds like a good fit for me. Seen some movie rumors for this one, too.

2.) Daughter of the Forest by Juliet Marillier - I've heard that this is a great retelling of the Six Swans. I've had it on many lists on Goodreads and on the blog...really need to break down and read it!

3.) A Girl of Limberlost by Gene Stratton-Porter - While this isn't a straightforward, fantasy retelling, I'm told that it's very much a Cinderella-esque story. Highly considered a classic by many, it's been on my to-read list for years.

4.) Ella Enchanted by Gail Carson Levine - The movie is one of my guilty pleasures (as are most Anne Hathaway movies). If it's as sweet as the movie, I'm sure I'd enjoy it.

5.) Beauty by Robin McKinley - Published back in 1993, this retro retelling also comes highly recommended. Beauty and the Beast is my favorite fairy tale, so I don't think I can go wrong with this one.

6.) Princess of the Midnight Ball by Jessica Day George - The Twelve Dancing Princesses isn't a fairy tale that's retold very often, so I hope to get around to reading this one day. Although I own several books by the author and I think her style fits my taste, I just haven't had the time. :(

7.) East by Edith Pattou - I've been meaning to read this one for years. Beauty and the Beast with a polar bear?? Very interesting. I've also read that it's a retelling of a Norwegian folktale.

8.) A Court of Thorns and Roses by Sarah J. Maas - As a fairly new release, this one's been praised for it's strong heroine and surreal setting. There's some debate if it's YA or New Adult.

9.) The Crimson Thread by Suzanne Weyn - Okay, Rumpelstiltskin is just creepy, even the name is creepy. But the 1880s New York seamstress setting is a really good fit for a retelling!